The arresting and intriguing architecture, cuisine, history and natual beauty of Morocco will entice you into further exploration. 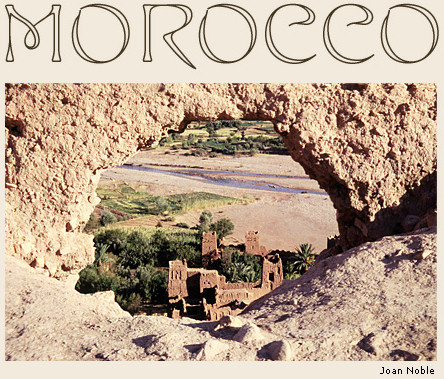 Noble Journeys' Morocco Travel Tips - What To Expect in Morocco


What should you expect in Morocco? For a start, it is literally a feast for the senses!

Morocco is an exotic, welcoming country, offering its extraordinarily still-intact ancient culture, striking architecture, delicious cuisine, hotel accommodations for every budget, excellent roads and ever-changing dramatic landscapes—and the Sahara! It is an ideal adventure, especially to those with a sense of style and curiosity, and who are open to new experiences.

The influence of the beautiful Kingdom of Morocco can be seen in recent articles about the country featuring food, fashion and architecture; on television programs; and as a background location in "Sex and the City 2". The Europeans have been coming here for decades, enticed by the exotic atmosphere, unique architecture, delicious cuisine and fascinating history. Tangiers, on the north coast, just a few miles across the Straits of Gibraltar, attracted illustrious painters Eugene Delacroix and Paul Matisse, writers Colette, Mark Twain, Edith Wharton and Paul Bowles. The late Malcolm Forbes, heir to Forbes magazine, had a luxurious villa in Tangiers that is now a museum. He threw himself an opulent 70th birthday party there, hosting 800 all-expenses-paid guests from all over the world for the weekend. Elizabeth Taylor was his date.

After centuries of French-Moroccan relations it became a French protectorate in 1912 until they gained their independence in 1956. Government offices and the schools are still run on the old French system. The French left behind their recipes for the delicious baguettes you'll find in cafes, as well as the French language, which is the second language of the country, Arabic being first. English is spoken in major cities, though a smattering of French will help you negotiate through the country. 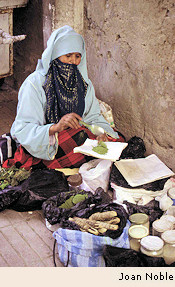 Morocco has been inhabited for many thousands of years, with Phoenicians, Ethiopians and Romans leaving their mark, notably the beautiful Roman ruins in the north—not what one expects when picturing Morocco (camels, sand dunes). But it was once the breadbasket of the Roman Empire, producing wheat and olive oil. The presses can still be seen in the Volubilis ruins outside of Fes. Wheat fields still cover much of the undulating hills between Rabat and Meknes, along with vineyards, producing grapes for the ever-expanding wine industry. Wine in a Muslim country, where the imbibing of alcohol is forbidden? It has been produced in Morocco for thousands of years; prized by the Romans, it was sent back to Italy. There are now several French vineyard owners and negotiations are in the works for a Chinese bottling factory there.

The people are warm and welcoming in this moderate Muslim country. The king and his subjects embrace the increasing number of visitors, and he has worked very hard to improve the roads, hotels, and other infrastructure to attract both visitors and investors. He continues to improve education for girls as well as boys, healthcare, communications and water supplies between villages, both near large cities as well as in the countryside and the Sahara. The king, and the Moroccan people, are strongly opposed to terrorism and fanatical individuals who have caused some disturbances in their beloved country. They do not like to be linked to Middle East problems and Islamic radicals, as they are not in the Middle East.

Ah, the Sahara. The magical dunes of shifting sands and changing colors from morning till night. There are easy and comfortable trips into the desert, either for a day or for a more interesting overnight. One can stay in a charming small hotel or a tented camp reached by a camel ride, which is one of the highlights of any trip to Morocco. The famous "blue men" are your camel drivers, guides and hotel staff. They dress in the classic cobalt blue caftans and turbans of the Tuaregs, who have been desert dwellers for centuries. Do not miss this experience.

Moroccan restaurants are for foreigners. Rarely does one find a Moroccan couple or family in a Moroccan restaurant. They feel the best Moroccan food is cooked at home. Instead, you will see them in pizza parlors (oh yes, there are Pizza Huts and McDonalds!) enjoying this Western fare. The décor in Moroccan restaurants is filled with mosaics, tile floors and carved doors, and delicious classic recipes are presented with a flourish.

Places to eat are easy to find, from food stalls along the roads and in markets, to small cafes and elegant dining places, serving delicious local specialties such as tagines of chicken with preserved lemons, or lamb with prunes. "Tagine" is the word for "stew", but it also refers to the beautiful cooking vessel—a shallow rimmed bowl with a high conical lid, usually made of terra cotta for everyday use. For more formal occasions, the food is cooked in terra cotta and transferred to a more ornate, colorful version for presentation and serving. Couscous, of course! Served with 7 vegetables (but with beef or chicken nestled beneath the mound of this classic steamed grain. A "Berber Omelet" is a tasty surprise: eggs cooked over tasty hot tomato sauce, sometimes with tiny meatballs. No pork is served in the country. Any full meal begins with many tiny dishes filled with flavorful cooked vegetables, followed by a tagine and desert. The latter is usually sliced sweet oranges with a touch of rose water-marvelous after a full meal. And then the pastries arrive-usually on a large platter with many choices. The final touch is the lovely silver tea pot filled with the ubiquitous mint tea, also imbibed all during the day. You can have it with or without sugar, though the classic drink is with sugar, quite sweet.

Bottled water, sodas, tea and coffee are served everywhere. Alcoholic drinks, including beer and wine, which are produced here, can be found in upscale restaurants and hotels in the large cities. No alcohol is served in the south, a more observant part of the country. In larger cities, one can find international style cafes, offering salads, sandwiches and French fries. Here is a place to see the local "yuppies", beautiful and elegant in western-style clothes. In the streets, you will see men and women dressed in the classic Moroccan robes—caftans for women, djallabas for men (robe with a pointed hood)-as well as in European style dresses, slacks, shirts, jeans, etc. Westerners should dress conservatively to show for respect for Moroccan culture—no short-shorts, tight clothing or low-cut t-shirts. No head covering is required for women, even in the beautiful Hassan II mosque in Casablanca, the only mosque open to non-Muslims, and not to be missed.

This is just a small taste of what to expect. Morocco is a vibrant country of diversity, beauty, culture and hospitality.

Discover more Morocco travel tips in Joan's next article entitled, "More of What To Expect In Morocco".


Noble Journeys has been arranging journeys through Morocco for individuals, families and small groups interested in art, architecture, weaving, religion, women's issues and so much more, since 1995 and would be happy to discuss your interests in traveling there.


Contact us or visit our Morocco main page for more information about an exciting Moroccan vacation.

An Islamic Journey Through Morocco